In August 1894, the newly-founded “I ETHNIKI” General Insurance Company purchases the Rossels mansion at 4 Korai Street in order to house its head offices there. Forty years later, the company’s Board minutes announce a resolution for the reconstruction of the building. Three select architectural engineers, Messrs. Lykoudis, I. Axelos and A. Kriezis, undertake to prepare plans and designs for the “… reconstruction of the Company’s real property at Korai Street”.

The specifications required were aligned with the prestige, scope of operations and 40-year history, up to that point, of Ethniki Insurance: state-of-the art construction, materials of the highest quality and facilities that exceeded by far the Greek standards of the time (central heating, plumbing installation, elevators etc.) as well as the necessary, at the time, bomb shelter.

On 11 June 1936, erection works commence by architects A. Metaxas and E. Kriezis and are completed on 30 December 1938 in exultant celebration. 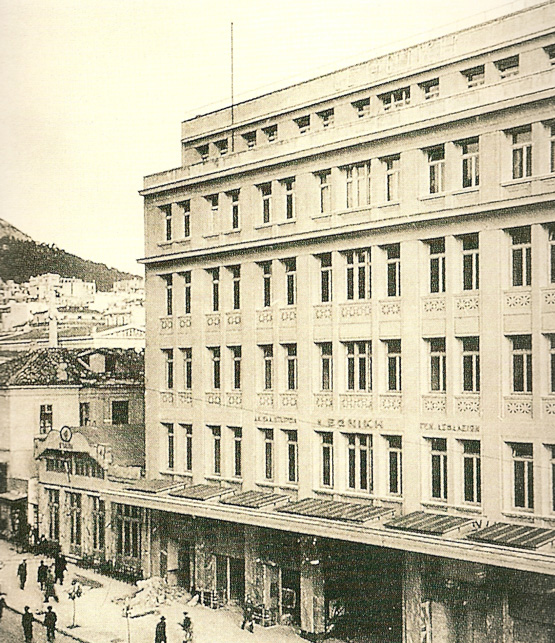 Following its establishment at Korai 4, Ethniki Insurance was making preparations to celebrate its 50th anniversary since foundation, in 1941.

Shortly after war was declared, the Ministers of Interior, Press and Tourism, leased per force a large part of the new building.

On 27 April 1941, the German occupation troops entered Athens and, a few days later, requisitioned the building of Korai Street and its entire furnishings. The requisition order had to be obeyed within a day. The Management’s anxiety is depicted in the following Board minutes:

The German occupation authorities requisitioned several parts of the Company's mansion where the former Ministry of Press and Tourism was stationed. Yesterday, we were informed that the requisition will expand to the entire part of the Company's offices facing Korai Street, including the largest part of the furnishings, and we have been given until this evening to evacuate said space, which comprises about the three fourths of the entire area of our offices.

ΣThe building now housed various agencies of the German occupation troops and the Kommandatur. On the top, there was the waving swastika flag whereas the underground bomb shelters were converted into prisons.

In the two basements (six meters below surface), the engineers E. Kriezis and A. Metaxas had constructed state-of-the art bomb shelters with (German-made) airtight metal doors and communication between the two floors through an internal stairway, which made things easier for the conquerors. The detention centres served mainly as transfer centres. Detainees were transported from there to Averof prisons, German martial courts, concentration camps, work camps or execution sites.

A great number of Greek patriots were held there as well as some German and Italian antifascists whereas many Greek citizens of all ages, including 14-year old children, made ‘a stop’ there for minor offences. Throughout the wall surfaces of the second basement and in a limited part of the first basement, detainees wrote or carved with any pointed object they had available messages, names, dates and drawings (human figures, boats, tramcars, cars, etc.), thus creating an indelible historical memory for future generations. The Germans painted the walls repeatedly but these continued to be filled with messages.

Rations during the Occupation. 150 people were fed daily in Ethini Insurance’s rations. 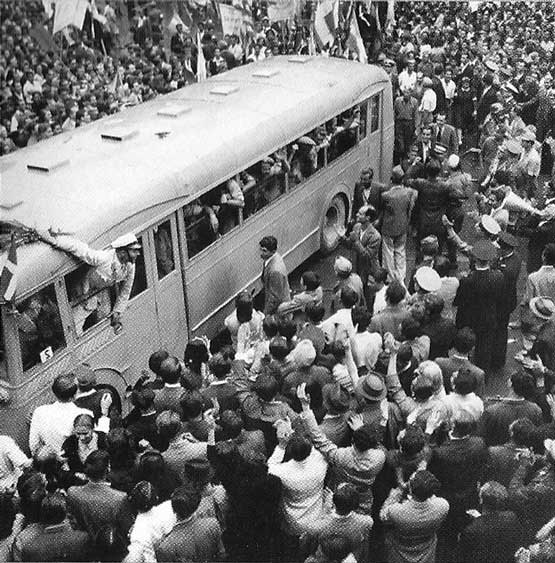 Athens after the liberation

On 12 October 1944, the German occupation troops left Athens and as Ethiki Insurance was about to move to the building, on 31 October of the same year, the mansion was requisitioned for the third time by the National Liberation Front (EAM). In early January 1945, “British troops are temporarily stationed there” and as soon as they move out, the building is requisitioned anew by the Greek Government in order to house the “Electrical Transport and Distribution Companies”.

In the following years, Ethniki Insurance commenced works for the preservation of the mansion and the repair of the damages caused by the consecutive requisitions.